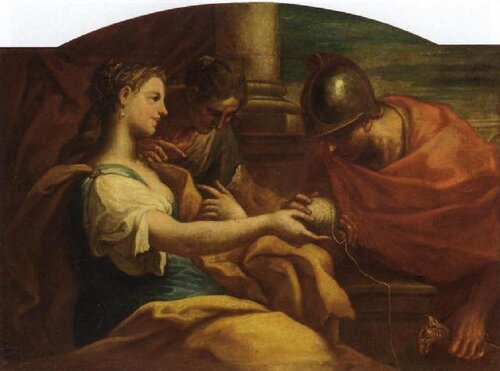 Ariadne was the daughter of King Minos of Crete and his wife Pasiphae. By her mother, she was the granddaughter of the sun god Helios.

She is best known for her pivotal role in the myth of Theseus and the Minotaur. According to the myth, King Minos' son died during some games that were organised in Athens. In retribution, the King of Crete attacked Athens and won. He then imposed a heavy burden on the city; he demanded that seven young men and seven young women be sent to Crete every year in order to be sent for sacrifice into the Labyrinth underneath Minos' palace, where the Minotaur dwelt. 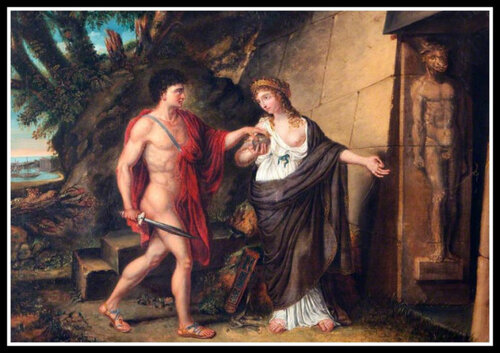 The Minotaur was a half-bull, half-human creature that was born from the union of Pasiphae with a bull. One year, when the fourteen young people of Athens were about to be sent to Crete, Theseus, son of King Aegeus of Athens, volunteered to be sent in order to kill the Minotaur and end the sacrifices for good.

When they arrived in Crete, Ariadne fell in love with Theseus and decided to help him in his quest. She gave him a sword to fight the Minotaur, as well as a ball of thread; she advised him to tie one end near the entrance of the labyrinth and let the thread unroll as he delves deeper into the twisting and branching paths. When Theseus found the Minotaur, he managed to slay him, and then followed the thread back to the entrance, where Ariadne was waiting. She then eloped with him on his way back to Athens. 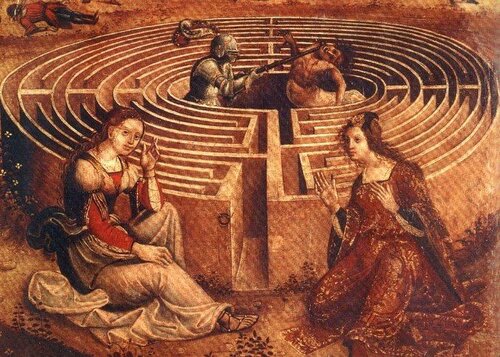 In general, it could be described as bridging worlds or you could say transcending duality. To continue with the metaphor of bridging worlds, eventually, it’s to the degree that the bridge dissolves and so do the two worlds, leaving one space where we have moved beyond concepts and perceptions of right/wrong, good/bad, superior/inferior, light/dark and me/other - instead, we see and accept the place of each in the other.

The labyrinth that  Ariadne’s Thread leads you out of, is the labyrinth that has kept separation in place. The hidden passages, loops and dead ends that exist in our minds that have kept the separation of the visible from the invisible, and what's conscious and unconscious to us so far apart.

To develop greater self-awareness is to make more of our unseen seen, to embrace what has been termed the shadow and to be fearless in the face of it - it's just more of me after all!

Ariadne's Thread will give you the manual that explains how all these mechanisms work so that you can see more of yourself  -  the wonderful human you who chose to plonk yourself deep into the middle of the labyrinth in this lifetime to see if you could find your way out!

This course is ideal for people working closely with others in guidance and transformational work because once you know the way out, you want to share more of it with others, who are interested in finding it for themselves.

For those wanting to do this course purely for self-development, it will provide you with greater understanding and compassion for all human beings, each doing their best to navigate their way through this same labyrinth.

EAs are designed by the consultant. They are 50-minutes that are agreed to by the participant to support their connection to their higher-self or higher-knowing and to help process information that was discussed on a recent call. Calls and conversations can come and go, the extra 50-minutes for the EA(s) is a personal commitment, by the client, to explore the subjects further and allow energetic upgrades and recalibration - to get the most from the discussion and experience.

Ariadne’s Thread is an advanced course and as such the responsibility for the IMs is placed in the clients’ hands. The materials studied in this course are of varying frequencies and require time to be with, as the lower mind (thoughts, emotions and behaviours) adjusts to these new ways of seeing the world.

IMs encourage the client to take some meditative time out to be with the information for personal integration.  This is discussed further in our first call.